What caused the Civil War to begin [most killed]

Neither the North nor the South knew how bloody the Civil War would be. Over 620,000 soldiers were killed (out of 2.4 million total soldiers) and millions more injured and much of the South was left in ruin. More American soldiers died in the Civil War than all other American wars combined (except for World War II).

The war happened between 1861-1865 when Abraham Lincoln was president.

What Caused the Civil War 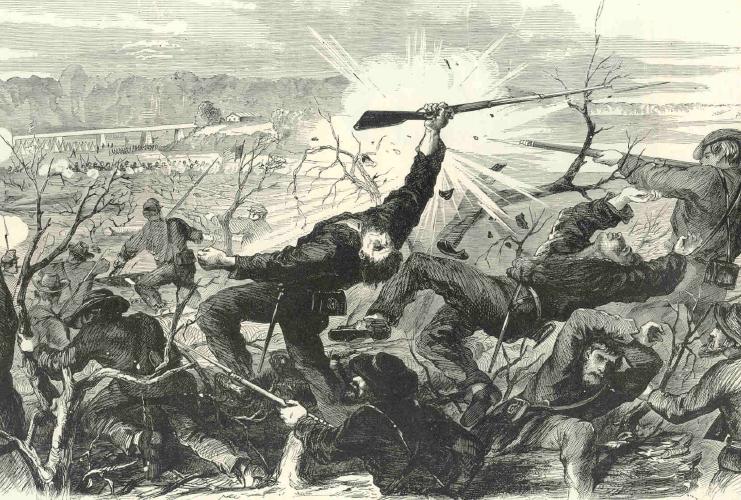 For many years before the year 1861, the pressure was mounting between the North and the South of the United States. There were a few things that caused this tension:

While the North was considered “free,” the southern states were not free. Slaves were forced to work. The only way they could be free is to escape into Canada. They did this by the Underground Railroad. This lead to freedom for them. Unfortunately, if Southern “slave catchers” cought them before they entered Canada, the United States allowed them to take them back to the southern states and put them back into slavery.

2. How they got their money

The North produced goods via factories and railroads.

The South produced farming and cotton for the country.

3. Who did the working

The North employed immigrants from other countries to do the work in the factories.

The South forced millions of men, women, and children to do free labor in these fields.

4. How politics were handled

The North and South both made compromises as more states joined each side. Both were similar in size and power and both were concerned about the other becoming too powerful. The states on top were “free” states and the states on the bottom were “slave” states.

Pressure mounting between the South and North

The North wanted the Southern states to stay part of the whole country. They fought for the union of America and the freedom of slaves.

First Battle of the Civil War

The first battle of the Civil War came at the Battle of Fort Sumpter. The fort was originally built to protect the coastline against outside forces. They realized they needed more protection during the war between the British and the French.

As tension mounted between the North and South, the Union (North) gathered in the fort and collected supplies, preparing for a fight against the Confederates (South).

The Confederates demanded the Union to vacate the fort, but the they refused.

After 36 hours and an estimated 3,000 shots fired on the fort, the Union realized the peril they were in. They decided to surrender against the Confederates.

Many Battles throughout the Civil War

An estimated 10,500 battles were fought during the Civil War. They spanned from thousands of different places from southern Pennsylvania to Texas; from New Mexico to the Florida coast. The majority of the fighting took place in the states of Virginia and Tennessee.

RELATED: The 13 Civil War battles fought in Kentucky [a short overview of each]

The Outcome of the Civil War

However, this was not the last battle fought.

The last battle was fought at Palmito Ranch, Texas, on May 13, 1865. The Union attacked the Confederate mainly for the cost of honor and money.

The Northern armies were victorious, and the rebellious states returned to the United States.